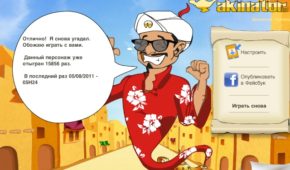 Akinator is an artificial intelligence programme. It was created in 2007 and managed to gain its worldwide popularity during only one year. Now it’s both an internet game and a mobile application. While playing Akinator, you’ll be asked various questions by a cartoon genie. Who’s gonna be the winner of this intellectual competition? Come on, show yourself! Firstly, push a start button and meet the genie. Very soon you’ll realize how smart he is! He looks like a character from Disney’s Aladdin: he hasn’t got legs and is wearing that strange genie hat. Of course, he’s got beard which adds wisdom to the character’s image. The genie is always ready to solve your riddle. Think about any person you know. It can be a famous politician, actor, singer, doctor or writer. The genie will ask you questions and offer a set of answers including Yes, No, Don’t know, Probably yes, Probably no. He’ll try to narrow down the potential character by checking the spheres or people he’s related to.  Sooner or later, the genie will give his answer and you’ll be surprised how quick and bright he is! Sometimes the genie might be mistaken, because everyone fails, so you are to give him two more chances to give the right answer. The rarer your character is, the more difficult it would be for the genie to guess who he is.

Think of anyone and he will guess!

The variety of characters that you can think of is unlimited. They can also be unreal, fictional or even non-living beings. What’s more, some people propose a real challenge for the wise genie and make him ask questions about their friends or pets. No doubt, a clever genie can’t know everyone in the world, but after winning the round you’ll have to save a photo and a name of the person/animal you thought about. It means that the database of choices is extended and next time the genie won’t get caught on your trick! Plus, your friends and pets have become famous within a few seconds! Cool, right? Just choose a nice photo in case if they’d like to check the credibility of your words! What a surprise will wait for them!

There are twenty-five questions which start from general ones. Akinator will ask you about the character’s sex, age and appearance. You’d like to postpone the moment of truth and will feel content when the machine will get confused. But don’t get too excited because your next answer will probably help the genie win. However, it’s so interesting to remember more and more characters. Some of them may remind of your childhood as you liked to read books about them, while the others might be your today’s idols. This game can be played by people of all ages. Akinator is useful for children as it develops their imagination and memory. Each time your child reads a new book, offer him to answer the genie’s questionnaire. What if it occurs that the cleverest genie doesn’t know this character? Your kid’s gonna feel proud of himself and want to read more! Enjoy this wonderful game together with your family!  Akinator will diversify your leisure and bring fun to your place. Even half an hour will be enough to make sure that it’s such a fascinating activity! Have some free time this evening? Now you know how to keep yourself busy!